She is a member of The Society of Wood Engravers, The West Country Potters Association and teacher at the International Summer School Bild Werk-Frauenau. Her prints have been selected regularly for the National Print Exhibition and twice for the Summer Exhibition in the Royal Academy of Arts. Her prints and ceramic pieces are in galleries around the UK.

She is inspired by the work of Jose Guadalupe Posada, the father of Mexican printmaking, and by Leopoldo Mendez who founded the Taller de la Grafica Popular, the celebrated organisation which produced the posters and pamphlets that brought the Mexican Revolution to its illiterate masses, and created some of the finest graphic art of the 20th century.

But her real love is and always will be Saul Steinberg. 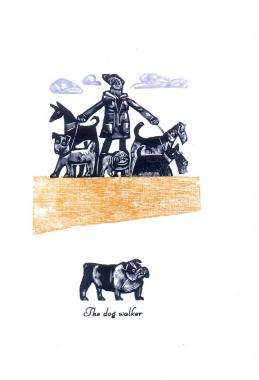