Jon Doran explores the duality of a painting; of engaging with the subject, the flowers, vase or bowl and then also seeing the actual substance of paint, the shapes, streaks and marks.

His subjects sit within the classical genres of still life, portrait and landscape which he articulates afresh through a digitally influenced, fragmented lens. He has a process of rendering and then obscuring, working and then destroying and reworking again, until a charged point of in-betweenness is found. In this way he encourages the eye to believe in the play of light on form to see a subject and then to break it down and simply see the brushstrokes of paint.

Jon says, “I want to make work that harnesses traditional processes of the past, as well as utilising the technologies of the modern day.... Hopefully my work isn’t just a mere example of mirror of current zeitgeists that will soon pass, but rather it attempts to engage with deeper more fundamental and universal themes, of beauty, meaning and purpose."

Jon graduated from Falmouth in 2014 and has since exhibited in Devon, Cornwall, London and Kent and at art fairs in Hong Kong and Singapore. 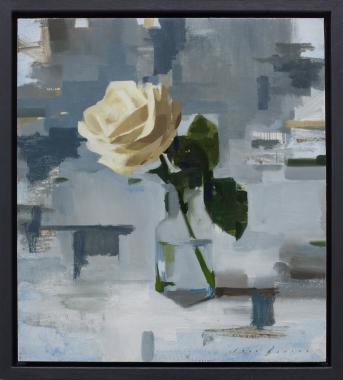